That’s a good question. Who am I actually? 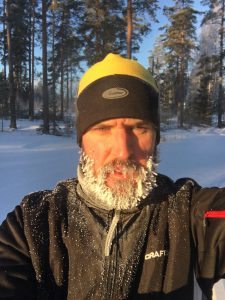 A few years after Metallica had left the building, I got my first computer. It was the legendary Commodore 64. Naturally that contained even more legendary cassette deck. Probably some of you know what I’m talking about when I say that loading a game with that bad boy usually took tens of minutes only to end up with an error. But me and friend of mine got it working also sometimes. Even so well actually that joystick after another broke down while trying to break the world record in 100 meter track and field race. Why am I telling you about my endeavor with my first computer? Because that’s one of the original reasons why I’m now writing to this blog.

Metallica, WASP, Twisted Sister, Kiss, Commodore 64 and a little bit of ice hockey. That’s basically it.
Until I found travelling. Actually learned to love it very early. First trips to Lapland, quite soon after that abroad. But Lapland has always been a special place for me. Later on I’ve learned a saying: “A man can leave Lapland but Lapland never leaves a man”.

About the travelling, I was lucky enough to have an opportunity to live and work abroad for five years during the both sides of the Millennium. That time was very challenging but at the same time one of the best times of my life, so far. During those years I learned a lot from life and technology. The subject areas of this blog.

Sports had been one of the biggest things in life for me even before moving abroad. Especially ice hockey but also several other sports. Living over there and having a privilege of following professional sports from quite close and attending very special events made that clear. I love sports. Both watching it but also doing it. Actually later on I’ve given some thoughts about me and sports. If things would have turned the other way, would I have loved it so much that I could have done it professionally? Fascinating.

Now a little bit about the technology. You can read the basic stuff from my LinkedIn profile so I don’t repeat that here. But I will say this. Back in 2005 I started to work in a company called Quartal in Helsinki. When I started over there, I got to know several very nice and very talented people. With these people, I started to work with Microsoft CRM. The beginning…well…it’s always the beginning when you start working with something that not many people have tried before and there is not that much knowledge yet out there. You try, fail and learn. You make mistakes and learn. I just read somewhere a good saying that fits into this moment: “no matter how many times you fail, you are still thousands of miles further ahead of those people who never even try”.

These will probably be the high level subjects that I am going to write to this blog. Let’s see what happens. The truth is out there.

My first touch to Power BI connected to Dynamics CRM